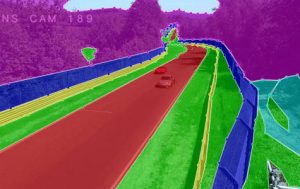 The 21km Nordschleife version of the circuit is where the experiments are taking place.

“In contrast to the Grand Prix circuit, the Nordschleife has not yet been equipped with cameras and is therefore out of sight from race control,” according to Fujitsu. “This meant it was often difficult to assess and react to issues quickly. In the event of an incident such as a vehicle leaving the track, race marshals relied on radio and communication with the marshals on the track to Relay the information back to race control and make decisions.”

The plan calls for 100 HD cameras to cover the whole 21km, which has 73 turns as well as dips and hills. Several hundred vehicles can be on the track simultaneously.

“The sheer number of cameras means the circuit cannot easily be monitored reliably by humans,” said Fujitsu, which is “developing an artificial intelligence system to monitor all the video feeds in real time, and flag any potential dangers it identifies. When potential issues are spotted, the system instantly notifies race control and switches to the relevant video feeds while simultaneously giving the opportunity to notify approaching traffic, for example by using trackside LED displays.”

Eight cameras along a 2.8km stretch of Nordschleife called Doettinger Hoehe is stage 1 of the digitalisation project – the software is modular so that more sections of track can be added. Optical fibre links to the cameras, and local (non-cloud) processing are used to minimise system latency.

The software incorporates object recognition to identify vehicles or people on the track, and image segmentation to discriminate between the track, gravel, grass, guardrails and safety fences (see image above). It is being trained to detect oil, dirt, debris or other track anomalies, and to cope with weather conditions such as rain or shadows.

“This project certainly presented some challenges, including the need for continuous power and bandwidth in the middle of the Eifel mountains,” said Fujitsu European head of automotive Joern Nitschmann. “However, the Nuerburgring’s race safety expertise, combined with our experience specifying, developing and installing complex AI solutions, has proven to be the perfect team.”

The first live test of the track infrastructure was at a 24 hour endurance in June. “Now we are collecting data from the test sector, and continuing to develop the solution based on these insights,” said Nuerburgring MD Mirco Markfort.

Called the BEDSS series, they are IP66 rated to protect their contents against water and dust, and are also able to withstand impact to IK10 specifications and temperature ranging between -20 and +55°C. There are six different sizes, ranging from 300 x 200 x 150mm to 500 x 500 x 200mm. Suitable applications include corrosive […] MikroElektronika has stated that its multi-architectural software development kit, mikroSDK 2.0, now supports 147 MCUs from NXP. mikroSDK is a compilation of open-source software libraries with unified API and software development tools, making application code portable and reusable on multiple different platforms and architectures, with practically no code changes. The addition of NXP’s Kinetis family […]

Microsemi PolarFire FPGA video and imaging kits are available for sale at Mouser, supporting 4K video applications in the development of miniaturization and low power consumption

The growth rate is 48.3%!China’s core production capacity is rising rapidly, and the rise is only a matter of time

Kickstart: Did you hear about Stonehenge and plastics?

What is the daily output of the automatic 1 for 2 N95 and KN95 head-wearing mask machines?

There Are Several Kinds Of Masks. What Are They Used For

Causes Of Wear and Damage Of Plastic Mold